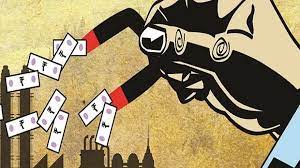 INTRODUCTION:
In 2016, the Insolvency and Bankruptcy Code (“Code” or “IBC”) was enacted with the objective to bring the insolvency law in India under a single unified umbrella and to speed up the insolvency process.1 Time and again, the Supreme Court has interpreted various provisions of the Code to fill up the gaps and lacunae, and to explain the true scope and ambit of such provisions. Recently, the Supreme Court in a batch of matters namely Ghanashyam Mishra & Sons Pvt. Ltd. vs. Edelweiss Asset Reconstruction Company Ltd.,2 has dealt with three important questions/ issues with respect to the claims which were not part of the resolution plan approved by adjudicating authority. The abovementioned three issues are as follows:

a) Whether any creditor including central government, state government or any local authority is bound by the resolution plan once it is approved by an adjudicating authority (National Company Law Tribunal or “NCLT”) under Section 31(1) of the Code?

b) Whether the 2019 amendment to Section 31 of the Code is clarificatory/ declaratory or substantive in nature?

The amended Section 31(1) of the Code is as under:

(1) If the Adjudicating Authority is satisfied that the resolution plan as approved by the committee of creditors under sub-section (4) of section 30 meets the requirements as referred to in sub-section (2) of section 30, it shall by order approve the resolution plan which shall be binding on the corporate debtor and its employees, members, creditors, 3[including the Central Government, any State Government or any local authority to whom a debt in respect of the

payment of dues arising under any law for the time being in force, such as authorities to whom statutory dues are owed], guarantors and other stakeholders involved in the resolution plan.

BRIEF FACTS OF THE CASE:
Vide the aforesaid judgment Supreme Court of India decided a bunch of matters, however, the main appeal was Civil Appeal No. 8129/2021. In the said matter, the Corporate Insolvency Resolution Process (“CIRP”) was initiated in respect of Orissa Manganese & Minerals Ltd. vide an application filed under Section 7 of the Code by the State Bank of India before NCLT, Kolkata. On 03.08.2017, Interim Resolution Professional (“IRP”) was appointed and CIRP was initiated w.e.f. 03.08.2017. The IRP was subsequently confirmed as Resolution Professional (“RP”) by the Committee of Creditors (“CoC”). RP thereafter collated the claims and proceeded with inviting the resolution plan in accordance with the provisions of the Code.

The CoC, then decided to initiate a fresh process for invitation of resolution plan only from the applicants, who had earlier submitted their EOI. In response to the same, three resolution plans were received from GMSPL, EARC and one more entity. This time, GMSPL was ranked the H1 bidder by the CoC and after several rounds of negotiations, resolution plan submitted by GMSPL was approved by the CoC by more than 89.23% of the voting share of financial creditors of corporate debtor.

Subsequently on approval of the plan, the RP filed an application before NCLT Kolkata for approval of the resolution plan submitted by GMSPL. At this stage, EARC filed an application challenging the approval of the aforesaid resolution plan, besides filing an application challenging the decision of RP in not admitting its claim. EARC’s claim was based on the fact that the corporate debtor had executed a corporate guarantee securing a loan obtained by one of its sister concerns namely Adhunik Power and Natural Resources Limited from an entity namely India Infrastructure Finance Company Limited. The aforesaid entity assigned its rights to EARC. EARC being the assignee of the aforesaid submitted its claims to the RP.

EARC contended that its claim was not considered by the RP and therefore, in not admitting the claim on the strength of corporate guarantee, RP violated Regulations 13 & 14 of the Insolvency and Bankruptcy Board of India (Insolvency Resolution Process for Corporate Persons) Regulations, 2016. It was prayed in the above application that GMSPL may be directed to undertake to pay the full amount due and payable under the said corporate guarantee besides other necessary directions.

NCLT by an elaborate order dated 22.06.2018 approved the resolution plan of GMSPL and rejected the applications filed by EARC. EARC, thereafter, being aggrieved by the above order, filed two separate appeals before National Company Law Appellate Tribunal, New Delhi (“NCLAT”). The first appeal challenged the rejection of claims of EARC as financial creditor and thereby its non-inclusion in CoC. The other appeal challenged the decision of RP and CoC that the plan of GMSPL was better than the plan of EARC. One more appeal was also filed by Sundargarh Mines & Transport Workers Union (“SMTWU”) on behalf of workmen of corporate debtor.

NCLAT vide impugned judgment dated 23.04.2019, held that RP was justified in not accepting the claim of EARC and NCLT had rightly rejected the application filed by EARC. However, NCLAT also observed that the rejection of the claim of EARC for the purpose of collating and making it part of the resolution plan will not affect its right to invoke the corporate guarantee against the corporate debtor. NCLAT also held that the plan of GMSPL was better than the one submitted by EARC.

With respect to the appeal of SMTWU, grievance was that RP ignored the rightful wages, statutory dues and other benefits of 1476 workmen of the corporate debtor. NCLAT observed that after the period of moratorium, it was open for the persons to move before a civil court or to move an application before the court of competent jurisdiction against the corporate debtor. Aggrieved by the above observations of NCLAT that the claims of parties, which are not included in the resolution plan could be agitated by them before the other forums, GMSPL challenged the impugned judgment before the Supreme Court.

In so far as other appeals were concerned, the same were preferred by some government departments in respect of some of the statutory dues allegedly payable by respective corporate debtors, whereby it was contended that the amendment introduced in Section 31(1) of the Code was not applicable in respect of such dues being in existence prior to the amendment.

DECISION BY THE SUPREME COURT:
The Supreme Court while relying on catena of judgments and the recent judgment passed in the matter of Kalpraj Dharamshi vs. Kotak Investment

Advisors Ltd.,4 reaffirmed that for deciding key commercial aspects of bankruptcy process of a corporate debtor, the only competent body which can evaluate relevant factors and make the correct decision was CoC, wherein all financial creditors have votes in proportion to the magnitude of debt that they hold. It was further observed that upon receipt of a ‘rejected’ resolution plan, NCLT is not expected to do anything more, as it is obliged to initiate liquidation process under Section 33(1) of the Code. The court further relied on its earlier judgment of K. Sashidhar vs. Indian Overseas Bank,5 wherein it was held that NCLT has neither any jurisdiction nor any authority to analyse or evaluate the commercial decision or wisdom of CoC and therefore, NCLT cannot enquire into the justification of rejection of the resolution plan. The court further held the commercial wisdom of CoC has been given paramount status without any judicial intervention, for ensuring completion of the state processes within the timelines prescribed by the Code. There is an intrinsic assumption that financial creditors are fully informed about the viability and feasibility of the proposed resolution plan. 6 It is not open to the adjudicating authority or appellate authority to examine any other issue or ground other than what is specified in Sections 30(2) and 61(3) of the Code.

On the basis of the above, the court went onto answer the three issues in the following manner:

i. Once a resolution plan has been approved by NCLT under Section 31(1) of the Code, the claims in the plan shall be frozen and become binding on the corporate debtor as well as its employees, members, creditors (Creditors including central government, any state government or any local authority), guarantors and other stake holders. Any claim, which is not a part of resolution plan, on the date of its approval by NCLT, shall stand extinguished. No proceeding can either be initiated or continued in respect of a claim, which is not part of the resolution plan;

ii. Amendment to Section 31 of the Code is clarificatory and declaratory in nature and hence, the same shall have retrospective effect. It shall be considered to come into effect from the date on which the Code has come into effect;

iii. Therefore, all dues including statutory dues owed to the central government, any state government or any local authority, which are not part of the resolution plan, shall stand extinguished and no proceeding in respect of such dues can be continued or initiated.

CONCLUSION:
The Supreme Court after laying down the above law, proceeded to allow the Civil Appeal No. 8129 of 2019 filed by GMSPL observing that EARC had not even invoked the corporate guarantee based on which claim was filed by it. The corporate guarantee was invoked during the period when moratorium was in force, therefore, such invocation could not give rise to any claim being contrary to section 14 of the Code. Besides, the conduct of EARC was also a matter of concern as EARC did not choose to challenge the rejection of its claim by RP at the first instance. Instead, it kept participating in the resolution process and approached NCLT only when its resolution plan was rejected by CoC. In so far as other appeals were concerned, the same were disposed of in terms of the abovementioned law laid down by the Court.

The judgment of the Supreme Court is in line with the object of the Code i.e. to revive a corporate debtor who is on the verge of becoming insolvent, however, is capable of being revived. Further, the above judgment has also provided a finality to a resolution process whereby a creditor, whether financial or operational or even government departments, shall be completely prohibited from agitating or initiating any proceeding in respect of a claim which was not part of the resolution plan or was not preferred at the relevant time. Besides, a successful resolution applicant has also been granted protection from unnecessary litigation after completion of corporate insolvency resolution process and approval of the resolution plan by the adjudicating authority, which is a very significant development.

In light of the above, it is recommended that all creditors should keep a close watch on the status of the debtor/ borrower company so as to submit their claim in time so as to avoid missing the bus and loosing