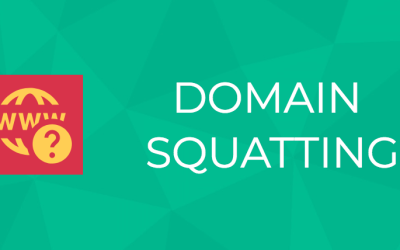 A domain name is a string of typographic characters used to describe the location of a specific location online. Formally known as the Uniform Resource Locator or URL, it is often considered to be the address of a certain website. A domain name is a unique name that identifies a website.

The existence of domains without specific requirements for the registration brought a concept of “first come, first serve”. This has created many disputes with trademark owners. Since the 1990s, many speculators have started to register domain names in order to resell them for a much higher price to trade mark owners and new businesses. Problems arose with trade mark owners because of their entitlements to IP rights which make them feel ripped off by this new practice called “cybersquatting”.

Obtaining fraudulent registration with an intent to sell the domain name to the lawful owner of the name at a premium price is called “Cyber-squatting”. Cybersquatting has been an active threat since the early 1990’s and has increased in severity ever since. Cyber-squatters sometimes register variants of popular trademarked names, a practice known as typo-squatting. This is a type of cybersquatting which relies on typographical errors internet users make while entering website address into a web browser. Typo squatters takes benefit of misspellings. In such cases they divert the traffic of the target site to their website and in course of an electronic transaction, the potential customer might end up making an alternative purchase from competitors’ company. Not only this, they also tarnish the image of the company. For e.g. PETA used by cyber-squatter as “People Eating Tasty Animal”.

Domain names hold an elevated level of importance for the reason that there can be only one user of a domain name unlike two or more users of a same or similar trademark under the trademark law, for various classes of goods/services or under honest concurrent use. The domain registration system follows the “first come, first serve” policy. So, once a person registers a domain name similar to a trademark, any other person using a similar mark is denied registration of another domain name similar to that trademark.

In India, there is no legislation which explicitly refers to dispute resolution in connection to Cybersquatting or other domain name disputes. There is no provision in the current Information Technology Act to punish cyber-squatters. Therefore, in India the issues of cybersquatting are mainly governed by principles of passing off. However, it has also adopted a policy, called INDRP in line with the UDRP.

Yahoo!, Inc. v. Akash Arora & Anr – This was the first case on domain law protection in India. The plaintiff was the owner of the trademark YAHOO!. It filed a suit against the defendants, with the remedy of permanent injunction, in order to restrain the defendants, from carrying any business related to services or goods, under the domain name “yahooindia.com”, on the ground that the name incorporated was deceptively similar to the plaintiff’s trademark. The plaintiff’s domain name“yahoo.com” was registered with the Network Solutions Inc. and was registered in 69 countries. The Delhi High Court held that the marks were confusingly similar with the well-known trademark of the Plaintiff.

atyam Infoway Ltd. v. Sifynet Solutions Pvt. Ltd – The Respondent had registered domain names www.siffynet.com and www.siffynet.net which were similar to the Plaintiff’s domain name www.sifynet.com. Satyam (Plaintiff) had an image in the market and had registered the name Sifynet and various other names with ICANN and WIPO. The word Sify was first coined by the plaintiff using elements from its corporate name Satyam Infoway and had a very wide reputation and goodwill in the market. The Supreme Court held that “domain names are business identifiers, serving to identify and distinguish the business itself or its goods and services and to specify its corresponding online location.” The court also observed that the domain name had all the characteristics of a trademark and an action of Passing off can be found where domain names are involved. The decision was in favor of the plaintiff.

The disputes involving the registration of “.in” domain name are resolved in accordance with the .IN Dispute Resolution Policy (INDRP) and the INDRP Rules of Procedure. As per INDRP, if a person considers that a registered domain name conflicts with his legitimate rights or interests, he may file a complaint with the .IN Registry on the following premises:

Rules thereunder, and the Dispute Resolution Policy & Rules. Arbitrator is required to pass an award within 60 days of the complaint and forward a copy of the same immediately to the complainant, respondent, and the .IN Registry.

Going through the majority of INDRP cases, it can be assessed that the arbitrators, in substantial number of cases have gone in the favor of the trademark holders for e.g. In the Vodafone Group Plc v. Rohit Bansal case, the Arbitrator found that the element of bad faith is established on the part of the Respondent if the Complainant is able to prove his rights in the trademark VODAFONE. The panel held that the Respondent had registered the domain name “vodafone.co.in” intentionally for selling it to the Complainant and making money from such sale. It ordered the transfer of the domain name to the Complainant.

It is also important to note that both UDRP and INDRP does not ouster the jurisdiction of civil court and, therefore, if the aggrieved party intends to seek compensation, then the complaint can be filed with the appropriate civil court as the remedies available under common law are exhaustive.

In the light of the above, in India, in order to settle dispute relating to domain names in the generic Top Level domain like .com, .org, .net etc. you have the option to resort to UDRP. In case of dispute relating to registration of “.in” domain name, a person may approach INDRP. Indian companies may also resolve their grievances relating to domain names by filing a suit in a civil court of competent jurisdiction. The civil court may pass an order under the Common law of passing off, and grant a permanent injunction against the wrongful user of the domain name. Such judgments are mostly in favor of the trademark owners discouraging cyber-squatters from hoarding domain names for their benefit.