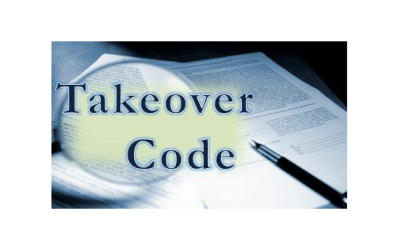 However, Regulations 10 and 11 of the Regulations provides for general exemptions from making such announcement/open offer. In fact, under the erstwhile Takeover Code of 1994, certain exemptions were granted to the acquirer and persons acting in concert (“PAC”) by Securities and Exchange Board of India (SEBI), in terms of the authority given to it under Regulation 4 on a case-to-case basis. However, under the aforesaid code of 1994, since there existed no clarity and transparency as to what kind of acquisitions may be exempted, amendments were enforced to negate the same.

Thereafter, on the TRAC (Takeover Regulatory Advisory Committee) Report’s recommendations; exemptions had certainly been streamlined and classified on basis of the specific charging provision from which exemptions would be available, with conditions for eligibility for such exemptions. Accordingly, this article would deliberate and shed light upon such exemptions under the Regulations i.e. within Regulations 10 (1) (2) (3) (4) and 11.

Acquisitions arising out of inter-se transfer of shares among “qualifying parties” as specified under this Regulation would be exempted from making an open offer. The nature and type of such qualifying parties have been determined upon the underlying principle that, such transfers do not represent a typical acquisition carrying an economic value. The following parties, namely, are:

SEBI had opined that since the transferees collectively held shares for a period of three years, and other conditions for availing the exemption were fulfilled, the proposed Inter-se Transfer could be exempted under Regulation 10 (1) (a) (ii).

2. Acquisitions done by persons, within the course of their business.

The second class of acquisitions exempted from the requirements of giving a mandatory open offer under Regulations 3 and 4 of the Regulations, are those done by certain persons within their “ordinary course” of business. Such categorized persons include underwriters, stock brokers, merchant bankers, stabilizing agents, market makers, Scheduled Commercial Banks ‘acting as a escrow agents’, Scheduled Commercial Banks or Public Financial Institutions ‘acting as pledgees while invoking a pledge’, and nominated investors ‘in the process of market making or subscription to the unsubscribed portion’.

There may exist acquisitions which are undertaken in pursuance of certain legislations and schemes of arrangement. Regulation 10(1)(d) enlists exemptions for such acquisitions, namely;

(a)an acquisition in pursuance of a scheme, under Section 18 of the Sick Industrial Companies (Special Provisions) Act, 1985. It is pertinent to note that the aforesaid act was repealed by the Repeal Act of 2003, and accordingly the Insolvency and Bankruptcy Code (IBC), 2016 is now applicable vis a vis Sick Industrial Companies. Therefore, such schemes if made under the IBC 2016 would be exempted under Regulation 10.

(b)an acquisition in pursuance of a scheme of arrangement wherein the target company goes through reconstruction, directly, like amalgamations, mergers or demergers, (due to any order of Court, tribunal or competent authority), would also be exempted.

(c)an acquisition in pursuance of a scheme of arrangement where the target company does not directly go through reconstruction like amalgamations, mergers, or demergers, (due to any order of Court, tribunal or competent authority) exemption may be given if certain pre-conditions are satisfied which includes the situation where the amount of cash equivalents paid is less than 25% of the total consideration under the scheme of arrangement, where the persons who held the entire voting rights before implementation of the scheme of arrangement, must at least hold 33% of the new combined entity. It is important to note that both the aforementioned conditions must be satisfied in order to obtain the exemption to make the public announcement.

5. Acquisitions in relation to provisions of certain legislations or rules:

In addition, Regulation 10 (1) exempts certain acquisitions made in pursuance or in relation to specific provisions of legislations/regulations, like the following:

The reasoning behind why an exemption is created for a lending company under the SARFAESI Act, while acquiring control of the borrower company, is that after recovering their dues, the former company is duty bound to return the control of the company. Hence, such acquisitions of control can be exempted under Regulation 10 (1) from making the public announcement.

2. SEBI (Delisting of Equity Shares) Regulations, 2009: Within voluntary or compulsory delisting, a company will acquire shares through either a buy back arrangement or preferential allotment. Further, the public shareholders holding equity shares which are sought to be delisted must be given an exit opportunity in accordance with the aforesaid delisting regulations. If such an exit opportunity is complied with under the delisting regulations, then an exemption under Regulation 10 (1) would be given to the acquirer(s).

4. The Companies Act, 2013: In accordance with Section 106 (1), no member of a company can exercise voting rights over called-on shares that are unpaid by him. Regulation 10(1)(j) exempts acquirers from making an open offer, where such called-on unpaid shares are acquired.

5. The Insolvency and Bankruptcy Code, 2016 (‘IBC’): A new exemption was added pursuant to amendment to the Regulations notified in 2017, where an acquisition is done in compliance of a resolution plan under Section 31 of the IBC. Under section 31 of the IBC, a resolution plan providing proposal for revival of the target company, is approved by the Adjudicating Authority. Such a plan may permit any acquisition in relation to the shares of the target company. Accordingly, the exemption applies to any acquisition done in pursuance of the said resolution plan.

Also, in case the voting rights of any shareholder is increased beyond the threshold limits laid under Regulations 3(1) and 3(2) without the acquisition of control, pursuant to the conversion of equity shares with superior voting rights into ordinary equity shares then the acquirer would be exempted from the obligation to make an open offer.

Exemption by SEBI under Regulation 11: Regulation 11 empowers the Board (“SEBI”) to provide exemption to the acquirer/target Company, for reasons recorded in writing, from open offer obligations and/or any procedural requirement or compliance, if it deems fit. This is very similar to the powers vested in the Board under Regulation 3 (1) (l) of the Takeover Code 1997. The company seeking such exemptions shall have to file an application supported by an affidavit [Regulation 11 (3)] and a non-refundable fee of Rs. 5 lacs [Regulation 11 (4)], post which, the Board may refer the case to a panel of experts constituted and on appropriate recommendations shall pass and host the exemption order on its website [Regulation 11 (6)].

For instance, in the example of Diamond Power Infrastructure Limited (Target Company); SEBI vide order dated March 23, 2016 exempted the Target Company from open offer on receipt of application on behalf of the promoters under Regulation 11 of Takeover Regulations. SEBI had noted that the Takeover Regulation specifically provided for a general exemption from the requirements of making open offer in acquisition of shares pursuant to the CDR Scheme. Hence, an exemption was granted in this case.

The general rule is that if he acquired more shares than his entitlement, he would be mandated under Regulation 3 to make an open offer. However, if more shares are acquired than the entitlement, another exemption can be availed under Regulation 10(4)(b). This exemption is subject to two conditions being fulfilled, i.e. (1) the acquirer should not have renounced any of his entitlements in such rights issue, and (2) the price of the shares at rights issue must not be greater than the ex-rights price of the target company as determined under sub-clauses [A] and [B] of the same regulation.

Regulation 10(4)(d) tends to exempt acquisitions in a target company in exchange for shares in another target company, pursuant to an open offer. Since such types of acquisitions were deemed as ‘passive acquisitions’ by the Review Committee, an exemption for the same could be afforded.

Regulation 10(4)(e) tends to exempt acquisitions made in a State level financial institution or their subsidiaries or companies promoted by them, by its promoters, pursuant to an agreement between the two.

Similarly, Regulation 10(4)(f) tends to exempt acquisitions made in a venture capital fund, alternative investment fund (category I) or foreign venture capital investor (that are registered by the SEBI Board), by its promoters, pursuant to an agreement between the two.

In reiteration, the aforementioned schemes of exemptions under Regulations 10(1) and 11 are also applicable to acquisitions of control. In addition, another exemption is afforded to these acquisitions under Regulation 10(2). This exemption is in relation to the Corporate Debt Restructuring (‘CDR’) Scheme, wherein acquisitions do not change the control of the target company.  The introduction of the CDR Scheme was for the revival of corporate companies as well as for the safety of the money lent by the banks and financial institutions. Such a scheme shall be approved by the shareholders, by passing a special resolution by way of postal ballot. Any acquisition of shares done in pursuance of the aforementioned scheme, which does not involve a change of control in the borrower company, would be exempted from making the open offer.

It is must be reiterated that the Regulations were introduced to ensure that acquisitions were undertaken in a fair and transparent manner. For example, Regulations 3 and 4 of the Code provides a strict obligation to make an open offer, when a certain percentage of acquisition in the target company is made. However, if such Regulations were to apply to all acquirer companies in all circumstances, then there would have been both, restriction in the overall business of companies, and an overlap of obligations within other laws. As seen, the above Regulations have either provided for general exemptions (i.e. Regulations 10(1) and 11 which apply to all acquisitions) or exemptions within specific situations (i.e. Regulations 10(3), 10(4) and 10(2) which apply to initial trigger acquisitions, creeping acquisitions, and acquisitions of control, respectively). Hence, we may certainly conclude that the ultimate objective of the TRAC has been well met under the Regulations, i.e. to categorize, streamline, and specify unambiguous exemptions.

E-signing of contract and documents in India