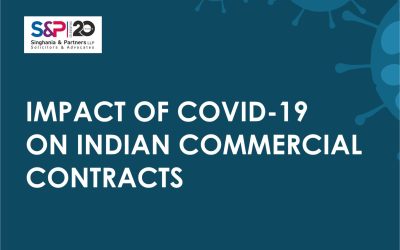 The outbreak of COVID-19, the pathogen causing coronavirus has been widely reported and the suffering consequences still continue. Countries around the world have imposed mass travel bans, temporary lockdowns and extremely restricted human movement. The World Health Organisation has declared the outbreak as a pandemic. Domestic and transnational trade has come to an unprecedented standstill. It has led to a crippling effect on the domestic market and its network of supply chain. The lethal virus already has the legal industry in wrangles. Recently, even the Supreme Court of India had invoked its plenary powers under Article 142 of the Constitution to extend the ‘limitation period’ (by way of suspension) in all cases against the usual timeline as enumerated under the Limitation Act, 1963.

There has been adverse impact on the world economy. Such a negative impact has affected the domestic market chain at its core. The immediate results were supply-chain disruptions, ‘unintentional’ and imminent delay in performance and carrying out of the ‘contractual’ obligations. From construction contracts to manufacturing and supply agreements, the variety of contracts which are likely to be affected by the spread of COVID-19 is undoubtedly humongous. Additionally, this new impossibility brings out challenges against land acquisition, financing of big projects and delay in engineering and technological research and advancements. Counterparties, including suppliers and professional service lenders (e.g. Independent Consultants & Accountants) may seek to avoid immediate performance, by citing delay or non-performance borne out of an unexpected event. Parties may cite this pandemic as a ground for opting re-negotiation of price and terms of the contract.

At this unfortunate state of affairs, parties to commercial contracts and legal experts, nationally and internationally are continuously reviewing and assessing their contractual provisions for seeking suitable rights and obligations, specifically on the potential routes for discharging the commercial arrangement or contract, particularly force majeure. It squarely forms a defense against the grunt norm of pacta sunt servanda (latin for “agreements must be kept”).

FORCE MAJEURE & INDIAN CONTRACTUAL JURISPRUDENCE
Although the word ‘force majeure’ is absent in its skeletal form in Indian law, its doctrine can be traced from Section 56 of the Indian Contract Act, 1872 (‘the Act’). A force majeure provision in a commercial arrangement is an express provision of circumstances in which performance under the contract will be excused or suspended temporarily.[1] The expression force majeure is borne out from the “Code Napoleon” and has a wider meaning than “act of God”, though it may be unclear if this includes all “causes you cannot prevent”.[2]  Section 56 of the Act, allows for temporary discharge of obligations on grounds of impossibility in the instance of any untoward event or change in circumstance that is totally dehors the “very foundation”[3] upon which the parties entered their agreement. The sine qua non for invoking such a clause is (a) an existence of a valid contract between the parties; (b) the contract is yet to be performed (during the period of temporary struggle for which force majeure is sought for); (c) the contract after it is entered into becomes impossible to perform due to fact or law.

The underlying principle with respect to a Force majeure event is that, upon the occurrence of an event or circumstance that is not reasonably within the control of a party and is unavoidable, and which prevents or delays that party from performing some or all of its contractual obligations, that party will be relieved from its contractual obligations/ liability. As a result of invocation of Force majeure, the performance of the contract is not merely suspended but the affected party is expected to continue to perform its obligations to the extent not prevented by an event of force majeure. The party claiming force majeure is under an obligation to prove that it has taken all reasonable endeavors to avoid or mitigate the force majeure event and its effects. This being subjective standard, differs from case to case and therefore needs to be interpreted accordingly. In some contracts, if the period of force majeure is prolonged, parties may be permitted to terminate the contract depending on the practical difficulties being faced by them.

There have been occasions where the parties to the contract have pleaded different situations/ events to be included in ‘Force Majeure’. For instance, in 2016 when the Government of India, without any prior notice declared demonetisation of certain Indian Currency notes, this had a stressful effect on the various sectors including construction and the realty sector which majorly involved cash transactions. Consequently, the parties to contract raised dispute claiming cost/ termination of contract treating demonetization as a force majeure event. The Central Electricity Regulation Committee (CERC) recently held “demonetization” as a valid threshold to invoke the force majeure clause(‘FMC’)  that was entered upon by the party. However, the same goes well against the decision of the Hon’ble Supreme Court in Energy Watchdog v. CERC, where the scope of FMC was construed to be strictly narrow.[4] Therein, a new dimension to the interpretation of force majeure event and its widening scope was recognized in India.[5]

PANDEMIC & FORCE MAJEURE
The global impact of the outbreak has caused an alarming case of extreme disruptions of commercial activities and day-to-day business transactions. It is imperative to record that, there has been a consequential lockdown and suspension orders by various governments vide specific ordinances and general government orders. Therefore, it is completely fair to state that the consequences of the pandemic have the effect of a rigid interference.

The scope and extend of a FMC in the event of such a pandemic has to be assessed on the “definition of force majeure” under the parties’ agreement, as well as on the jurisprudence pertaining to the terms ‘extraordinary events’ and ‘circumstances beyond the reasonable control and expectation of the parties’.  However, it is also essential that even if the FMC within the agreement is inclusive of the terms epidemics and pandemics, the party affected has to generally prove its interference with the performance of the contractual portion.

In the present scenario arising due to the COVID -19 pandemic, the Government of India has also taken steps to safeguard the interest of parties in commercial contracts. The Ministry of Finance, Government of India vide an office memorandum dated 19.02.2020 recently clarified with respect to ‘Manual for Procurement of Goods, 2017’, and declared that in the event of any disruption in the supply chains due to spread of corona virus, such situation will be covered in the FMC in the contract. It is further clarified that such a situation should be considered as a natural calamity and FMC may be invoked, wherever considered appropriate, following the due procedure.[6] The said Manual is issued by the Ministry of Finance for various Ministries/Departments which have been delegated powers to make their own arrangements for procurement of goods under the Delegation of Financial Power Rules, which have to be exercised in conformity with the ‘Procurement Guidelines’.

Recently on FMC, the Ministry of Finance vide notification dated 13.05.2020  clarified that parties to the contract can invoke FMC for all construction/works contracts, goods and services contracts and PPP contracts with Government Agencies and in such event, the date for completion of contractual obligations which had to be completed on or after 20.02.2020 shall stand extended for a period not less than three months and not more than six months without imposition of any cost or penalty on the contractor/concessionaire. The Concession period in PPP – contracts ending on or after 20.02.2020 shall also be extended by not less than three and not more than six months. The period of extension, i.e. from 3-6 months, may be decided from case to case based on the specific circumstances and the period for which performance was affected by the force majeure events. The invocation of FMC would be valid only in a situation where the parties to the contract were not in default of the contractual obligations as on 19.02.2020. It is categorically stated that invocation of FMC does not absolve all non-performances of a party to the contract, but only in respect of such non-performance which are attributable to a lockdown situation or  restrictions imposed under any Act or executive order of the Government/s on account of COVID-19 pandemic.[7]

Similar initiative was taken by the Ministry of New & Renewable Energy with respect to ‘solar project developers’. The Ministry vide an Office memorandum dated 20.03.2020, recently  declared that whoever miss contractual obligation deadlines on account of COVID -19, can invoke the  FMC to avoid any financial penalties.[8]

Such initiative by the Government of India is a big reprise in such tough times. At the same time, even in the presence of such evidenced events, the question of force majeure and its application to a particular contract would have to be looked individually all over again at the stage of litigation or arbitration. There must be ample proof to show that there were no alternative means or method for performing the party’s obligations under the contract.

SAFEGUARDS IN COMMERCIAL CONTRACTS
In the light of this current pandemic, few safeguards to be resorted in commercial contracts are:-

All records with respect to unavoidable additional expenditure incurred must be maintained.

Supreme Court Directs hearing of Extremely Urgent Matters Via any available mode such as Skype, Facetime, Or Whatsapp