Miscellaneous Questions on M&A in India

Miscellaneous Questions on M&A in India 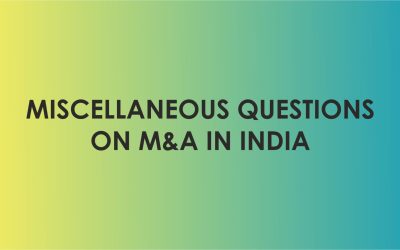 Q1) Is there any mandatory requirement to deposit monies with the third party?

There is no mandatory requirement to deposit monies with the third party; the same depends upon the intention of the parties to the transaction.

Q2) What is the procedure to appoint directors and any other officer of the company?

Powers of the Attorney Restrictions

Q3) What are the limitations of power endowed by a power of attorney?

The powers of the attorney is limited by the terms & conditions contained in the power of attorney.

Evidence of Due Execution – Faxed/emailed Documents Admissible in Court?

Q4) Whether digital signature certificates admissible as evidence in court of law?

Q5) Do lawyers give any strictly enforced undertakings?

Lawyers generally do not give “undertaking” in India.

Required due execution legal opinions, requirements, and rules concerning the giving of opinions?

Q6) Is there a statutory requirement to seek legal opinion before execution of transactional documents or closing of transaction?

It is common for parties to seek legal opinion to ensure that the documentation required to be executed is in order and complies with the closing formalities (representation & warranties on part of the buyer). But there are no specific rules or legislation governing the same.

Non-compete enforceable? If so, how long for?

Q7) Whether a non-compete clause enforceable in India?

Non-compete may be enforceable provided restriction is for a reasonable period. Generally, restrictions for a period from one to two years may be considered reasonable depending on the nature of business.

Execution and Notarization for M&A in India

Anti-Trust Laws for M&A in India

Compoundable Offences Under the Companies Act, 2013