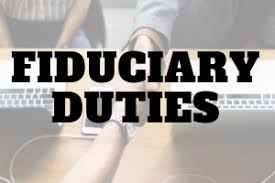 The concept of fiduciary duty that a director owes to the company has been around for centuries.  The Latin root of the word fiduciary – fiduciarius – means one in whom trust is reposed. Accordingly, as the law developed, imposition of sanctions upon fiduciaries who failed to act appropriately also came about in a corresponding manner.  In England, it has been around since the 18th Century, in some shape, form or manner. Simply put, fiduciary means trust, loyalty and confidence and allegiance that a director owes to the company.

THE INDIAN PERSPECTIVE
As far as the Indian context is concerned, Section 166 of the Companies Act, 2013 (“the Act”) lays down that “A director of a company shall act in good faith in order to promote the objects of the company for the benefit of its members as a whole, and in the best interests of the company, its employees, the shareholders, the community and for the protection of environment.” Therefore, the director, irrespective of the nature of his title and scope, has a duty to act in the best interests of the company, and to ensure that they are overarching over his own.

It is pertinent to note that Section 166 makes a specific reference to the protection of interests of shareholders by directors, something that was visibly absent from the erstwhile Companies Act, 1956. The genesis of formally incorporating this in the Companies Act, 2013 can be traced back to the ‘Report on Company Law’[1] wherein the experts made the following remarks:

“5. …….It is also increasingly being recognized that the framework for regulation of corporate entities has to be in tune with the emerging economic scenario, encourage good corporate governance and enable protection of the interests of the investors and other stakeholders.”

The expert committee had further stated that the interests of the investors have to  be safeguarded in a manner that enables them to exercise their choice in an informed manner while making investment decisions, and also providing them with a fair exit option.”[2]

HOW THE COURTS HAVE INTERPRETED FIDUCIARY DUTY
The primary duty of the directors is to exercise their powers in good faith and honestly for the benefit of the company. The Courts of England have, in the same line, also held that the Directors are duty bound to act in the best interests of the company. In Cook v. Deeks[3], a contract which was offered to the company was rejected by the directors who subsequently accepted it in their personal capacity and made profit off the deal. The court observed that those who assume complete control of company’s business are not at liberty to sacrifice the interests, that they are bound to protect and must not divert business in their own favour while acting on behalf of the company.

Similarly, in Aviling Barford Ltd v. Perion Ltd.[4], a director being aware that the company’s property was being sold for £350,000 when its real value stood at £ 650,000, was held to be in breach of his fiduciary duty. English Courts have also held that any information received by the Director during his tenure cannot be used by him to his own advantage[5].

A similar approach has been followed by the Indian Courts wherein it has been held time and again that directors are the primary decision makers in the company, and their actions are attributable to the company itself. Therefore, directors ought to act in its best interests. In other words, section 166 stipulates that when the company is solvent, the directors are expected to fulfill their fiduciary duty, act in good faith and take decisions that would best serve the interests of the Company and its shareholders. Courts have held that directors act as agents, trustees or representatives of the company because of the fact that vis-a-vis the company they act in a fiduciary capacity[6].

DUTY TOWARDS SHAREHOLDERS
Although, the directors of a company don’t owe a fiduciary duty towards the shareholders, there is a certain duty and loyalty that is expected. In Dale and Carrington Invt. (P) Ltd. and Ors. vs. P.K. Prathapan and Ors.[7], the Hon’ble Supreme Court of India held unequivocally that that the directors of a company owe an obligation to the shareholders of the company to make all disclosures and to act in the best interest of the company, exercising due diligence and good faith. The Hon’ble Supreme Court also stated that irrespective of whether directors are described as trustees, agents or representatives, they have a duty to act for the benefit of the company and must not derelict their duty towards the shareholders and investors in the company.

The same principle was relied upon and echoed by the High Court of Madras in the case of G. Vasudevan vs. Union of India & Ors[8], thereby proving beyond a doubt that upholding the interests of the shareholder is one of the primary responsibilities of the director of a company and the Courts have, depending upon the specific facts and circumstances of each case, ensured that their rights and interests are protected.

The conflict over who the nominee director owes his foremost allegiance to is not new, nor is it confined to the Indian context. Courts of other commonwealth and non-commonwealth nations including but not limited to England, Australia and New Zealand have oft been faced with similar challenge of balancing the role of the nominee director.

In England, in the case of Boulting v. Association of Cinematograph Television and Allied Technicians[9], Lord Denning while dealing with fiduciary nature of Directors’ duties made it abundantly clear that directors have an overarching duty of “undivided loyalty” towards a company. Lord Denning placed great reliance on the principle stated by Lord Cranworth L.C. in Aberdeen Railway Co. v. Blaikie Brothers[10].  He observed that no person having duties that are fiduciary in nature can be allowed to enter into a binding agreement which would result in him disregarding his duties or acting in contravention of such duties.

In the same case, Lord Denning also commented on the position of nominee directors by saying that there is nothing wrong with a director being nominated by a particular shareholder to represent his interests  as long as the director is left free to exercise his best judgment in the interests of the company which he serves. However, if the shareholder mandates the director to follow his nominator’s express directions, then that is unlawful and in breach of his fiduciary duty to the company.

In India, in the case of Ionic Metalliks vs. Union of India[11], the Gujarat High Court observed that the extent of a nominee director’s rights and the scope of supervision by the shareholders are contained in the contract that enables such appointments, or in the relevant statute. However, nominee directors must be especially mindful about not only acting in the interests of their nominators, but acting in the best interests of the company and its shareholders as a whole.

In the case of AES OPG Holding (Mauritius) and Ors. v Orissa Power Generation Corporation Ltd and Ors.[12] , the erstwhile Company Law Board noted that a conflict of interest arises when a person owes allegiance to two or more entities/people and has to make decisions which would have an impact on such entities/people. In such a scenario, directors have to decide in favour of the company, otherwise they would be in breach of their fiduciary duties. This is particularly true for nominee directors.

In the case of Rolta India Ltd. & Anr. vs. Venire Industries Ltd. & Ors.[13] , the Bombay High Court , while dealing with the validity of pooling agreements entered into the shareholders of a company held that  shareholders are entitled to consider their own interest without keeping in mind the interest of other shareholders. This is contrary to the position of directors. Directors being fiduciaries of the company and the shareholders and are duty bound to do what they consider to be in the best interest of the company and cannot abdicate their independent judgment by entering into pooling agreements.

ANOTHER CONFLICT?
While on one hand, it is more or less settled that if a nominee director ever has to choose between his allegiance to the company and his loyalty to the nominator, the former will prevail. On the other hand, it brings to the fore another interesting supposition. We will elaborate by way of an illustration- it is common practice that a lot of investment agreements require the final consent of the shareholder/investor on the decisions made by the Board of the company. However, there may arise a situation wherein the nominee director has acted in compliance with his fiduciary duty towards the company but his action is not backed by the nominator and the nominator has not consented to a particular Board resolution. In such a scenario, what is the validity of such consent of the nominator? While at this point, there is no clear position of law that has been fleshed out in respect of the question raised above, however, one can, through inference of the law and precedent say that, as long as the director is in compliance with the provisions of Section 166 and is acting in the larger interest of the company, irrespective of whether it is solvent or insolvent, no action can lie against the director.

Another perspective that may also need examination is if the nominating shareholder believes that the director has not acted in compliance with his fiduciary duty, does he have any remedy in law? We believe that, in such a scenario, the nominating shareholder can opt to take derivative action against the director and proceed against him in a court of law. In the case of Rajeev Saumitra vs. Neetu Singh[14], the Delhi High Court observed that where a director has acted in a manner which was in conflict between its personal interests and its duties to the company, without the consent of the company, the director would be liable to “pay over to the company which he or she has betrayed by disloyalty”.

Similarly, in Starlite Real Estate (ASCOT) Mauritius Ltd. & Ors. vs. Jagrati Trade Services Pvt. Ltd., the Calcutta High Court held that where some wrong is being done to the company by the directors in control, derivative action by the shareholders, even if they are in minority, becomes imperative to protect the interest of the company.

Therefore, keeping in mind all of the above analysis, it can be unequivocally stated that while the insertion of Section 166 has no doubt been a welcome move and has formally introduced the concept of fiduciary duty in the Indian corporate system, it has also simultaneously brought to the fore more questions that need to be resolved, either via amendments or by way of judicial precedent.

A Perspective on the Current Regulations on Payment Aggregators