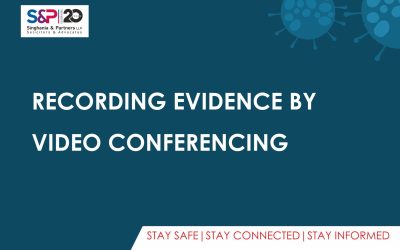 “Faith is belief without evidence and reason; coincidentally that’s also the definition of delusion.”- Richard Dawkins

In today’s time when the entire world is griped with Pandemic, Commerce and businesses are struggling to regain its foot. Various means are being devised to restart the businesses. Even the courts are deriving new methods and mechanisms to resume normalcy. In such situation recording of cross examination through virtual medium and/or video conferencing is a relevant and important topic to discuss.

Definition of Evidence
Section 3 of the Indian Evidence Act, 1872, defines “Evidence” to means and includes ––

(1) all statements which the Court permits or requires to be made before it by witnesses, in relation to matters of fact under inquiry; (oral evidence);

(2) all documents including electronic records produced for the inspection of the Court; (documentary evidence)

Legal recognition of evidence via Video Conferencing
Evidence by Video conferencing was discussed in detail by the Apex Court, in the case of  State of Maharashtra v Praful Desai [(2003) 4 SCC 601]

The Court opined that ,“video conferencing is an advancement in science and technology which permits one to see, hear and talk with someone far away, with the same facility and ease as if he is present before you i.e. in your presence. In fact he/she is present before you on a screen. Except for touching, one can see, hear and observe as if the party is in the same room.”

Therefore, the presence of the Accused and/or his pleader  over video conferencing when evidence is being recorded amounts to ‘presence’ of the accused as envisaged under section 273 of  Criminal Procedure Code. Recording of such evidence would be thus be as per “procedure established by law”

In light of the above, the court allowed recording of evidence of witnesses staying abroad through video conferencing.

Guidelines for Court Functioning Through Video Conferencing During COVID-19 Pandemic (Suo Motu Writ [Civil] No. 5/2020)
Given the outbreak of  COVID- 19, the Supreme Court of India by its Order dated 06.04.2020, once again acknowledged taking evidence by video conferencing.

The guidelines that aimed at reducing physical presence of lawyers, litigants, court staff, para legal personnel and representatives of the electronic and print media in courts across the country and to ensure the continued dispensation of justice, provided for taking evidence through video conferencing with the caveat that such evidence shall be recorded only if both parties consent to doing so.

Additionally, only if it is found necessary to record evidence in a court room, the presiding officer would then take necessary measures to enable the same, thereby, shifting the preferred mode of taking evidence to video conferencing.

Lack of Infrastructure- in various parts of the country, courts to this day, do not have basic infrastructure like computers, uninterrupted internet and electricity connections to facilitate recording of evidence through video conferencing

Evaluation of Witnesses- The court is unable to judge the demeanor of the witness during video conferencing as opposed to a clear assessment a judge is able to make during an in person hearing.

Cross examination- Lot of advocates are of the opinion that cross examination is a process that depends on the verbal and non-verbal cues revealed by the witness. However, virtual hearings due to lack of audio visual clarity do not allow an advocate to promptly and clearly catch such cues.

Section 159 of the Indian Evidence Act, 1872- allows a witness to refresh his memory during the time of examination by referring to any writing he himself made. However, if a witness already has all documents placed before him, the entire purpose of such an examination is defeated.

There is absence of clear laid down procedures for recording such cross-examination through virtual medium.

Conclusion
In the present day and age where there is in fact an inevitable dependence on technology, there is a need for development of laws in a way so as to enable a more fluent transition to online mode. Recording of evidence through video conferencing, with proper law and procedure in place, will make the process more time and cost efficient. Further, it’ll become easier to record expert evidence. Supreme Court and various High Courts have repeatedly availed the aid of technology whenever the need and its possibility have coincided, hence a clear and elaborate rules and procedure for such processes is the need of the hour.