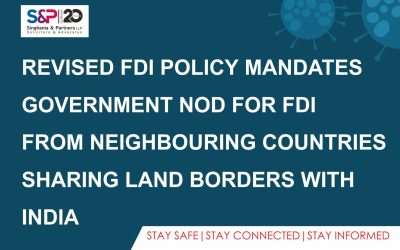 The Department for Promotion of Industry and Internal Trade (DPIIT), the Ministry of Commerce & Industry, Government of India vide Press Note No. 3 (2020 Series) dated April 17, 2020 (PN 3/2020) has amended para 3.1.1 of the current ‘Consolidated FDI Policy, 2017’ to curb opportunistic takeovers/acquisitions of Indian companies due to COVID-19 Pandemic.

PN 3/2020 provides that subject to the Foreign Direct Investment (FDI) Policy, a non-resident entity can invest in India, except in prohibited sectors/activities. However, the entities and/or citizens of the neighbouring countries (i.e. Bangladesh, Pakistan, China, Nepal, Myanmar, Bhutan and Afghanistan) sharing land borders with India, can make investment in India only after receiving the Government approval. The underlying idea is to regulate the investments and not to restrict them in its entirety.

PN 3/2020 continues to debar the entities and/or citizens of Pakistan from making investment in defence, space, atomic energy and other prohibited sectors/activities.

PN 3/2020 further provides that any subsequent change (directly or indirectly) in the beneficial ownership of the entities and/or citizens of the aforesaid neighbouring countries would also require Government approval.

The Department of Economic Affairs (DEA), Ministry of Finance issued the Foreign Exchange Management (Non-debt Instruments) Rules, 2019 (FDI Rules) which were notified on April 22, 2020. The said FDI Rules brought into force the aforesaid new norms, however, it lacks clarity on the broad terms ‘indirectly’ and ‘beneficial ownership’ used therein. It is now a wait and watch situation as to how these terms would be interpreted by different Ministries while considering the FDI proposals.