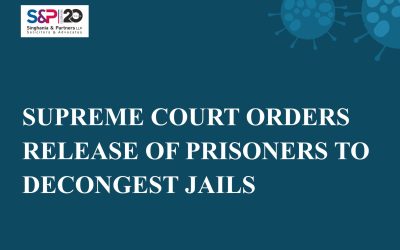 In light of the current lock-down, the Supreme Court of India ordered all States to consider releasing some prisoners on parole to reduce overcrowding in prisons and to constitute a ‘High Powered Committee’ which will decide on the matter. In order to avoid overcrowding in jails, the Hon’ble Court ordered convicts having jail term of not more than seven years to be released on parole. Two weeks ago, the Maharashtra Government had submitted an affidavit to the Supreme Court seeking release of over 5,000 prisoners on bail or furlough to decongest its already overcrowded prisons. The Chief Justice of India while directing the formation of a High-Level Committee in consultation with the State’s Legal Service Authority ordered “each state to constitute such a committee to determine which class of prisoners could be released on parole or interim bail for such period as may be appropriate.”